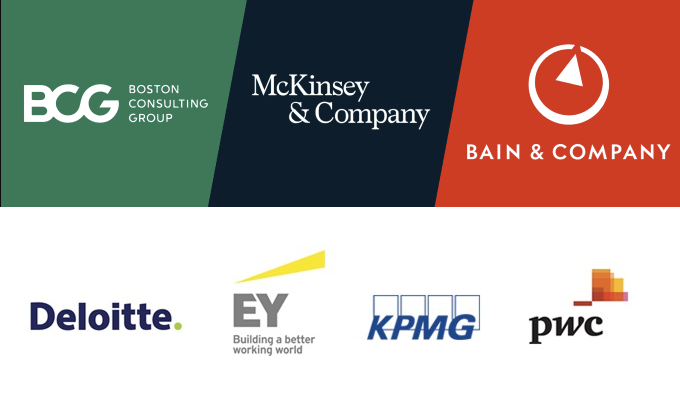 McKinsey & Company (McKinsey), Boston Consulting Group (BCG) and Bain & Company (Bain) are collectively known as the Big Three or MBB in the management consulting sector. They are known as the top guns and the most prestigious in their industry. Consultants who have one of these firms’ names on their resumes generally enjoy a list of many exciting post-consulting exit opportunities.

On the other hand, PwC, EY, KPMG and Deloitte are collectively referred to as the Big Four, that is, they are the four largest accounting firms as measured by revenue in the world. The Big Four perform most of the auditing work for some of the largest public companies in the world. The vast majority of Fortune 500 companies have their financial statements audited by one of the Big Four. Their clients include such powerhouses as Berkshire Hathaway, Ford Motor Co., Apple, Exxon Mobil, and Amazon.

Traditionally, the Big Four was solely known as accounting and auditing service providers. But during the 1980s and 1990s to create new sources of revenue by the 1980’s the Big Four witnessed a transition from providing traditional services to consulting and advisory by leveraging their financial and personnel capabilities. As a result, each member of the Big Four in addition to audit and assurance services also offers consulting services (management consulting).

This move means that they regularly go against MBB for a piece of the management consulting market; not only this, but they are also in competition for the same talent. Thus we will be making a few entries comparing each group against the other; this will help you decide whether a career in MBB or the Big Four is better for you.

On the list of best consulting firms by prestige compiled by Vault in 2020, MBB ranked at the highest level with their scores outperforming all other firms. The Vault list was based on a collection of data from surveys of working consultants, who were allowed to rate other firms but not their own. Thus MBB consistently ranks amongst not only the best consulting firms to work for but also the best companies to work for. With their long and rich history, MBB is the most prestigious of all consulting firms with brand names recognized throughout the world.

In the top ten list compiled by Vault, MBB occupied the top three positions; while members of the Big Four came in at fourth, fifth, seventh and ninth.

This brings us to our belief that other consulting firms including the Big Four may try to emulate MBB, but they cannot reach the prestige that MBB firms enjoy at least for the foreseeable future.

If the size is an issue for you then it’s worth noting that MBB is around a tenth of the size of the Big 4.

While getting into any of these groups is generally not easy, MBB takes this difficulty to a higher level.

According to managementconsulted.com, only 3% of MBB applicants get into MBB compared with 6% of applicants at top Ivy schools. Going by the former McKinsey managing director Dominic Barton’s statement this appears to be true. He said that the firm receives about 200,000 applications from interested candidates, but only about 2,200 of them get hired.

In other words, anyone applying to the firm only has a 1% chance of getting hired. So you have more chances of getting admission into places like Harvard and the like than getting into MBB!

On the other hand, the Big Four are way easier to get a job in. Any above-average graduate that can pass their test and interview can get jobs there. Remember that they employ more people so this makes sense.

Job security has especially been brought into sharp focus in the last 12 months due to the ongoing Covid-19 pandemic, with many people in accounting and finance teams in businesses across the country finding themselves unemployed through no fault of their own. But there is job security in both groups

Considering that the MBB firms have been around since the dawn of time, you can rest assured that there will be job security. Also, the fact that the MBB recruitment process is quite difficult and tries to get only the best of the best, it’d be hard to be laid off at MBB just like that.

The Big 4 has also remained relatively unscathed and business has continued to grow, even in the event of economic downturns or financial crises. In most cases, a position in the Big Four can be considered a secure one.

There is no debate here. The pay in MBB is higher than in the Big Four. MBB charge clients 3-4 times more per day than Big 4 firms due to the nature of the work, and this gets reflected in the average compensation for consultants. Consequently, they have a lot of money to share among less staff.

A huge pro of working with both MBB and the Big Four firms is the significant development and growth opportunities that will be available to you. Both are well structured with defined layers. You have an idea of where you’ll be in the next few years. The career ladder and promotion system are well defined.

You can however expect a faster career progression if you work at MBB. The speed at which a new consultant can make a Partner is typically faster at MBB (9 years) than at the Big 4 (15+ years).

In both groups, you’ll enjoy great training and learning opportunities. At the Big Four, you will receive hands-on training from top professionals and be able to lead your teams early in due time. However, MBB edges out the Big Four

MBB consultants experience accelerated learning because they receive mentorship from some of the best minds. Furthermore, by your 5th year in MBB, you could be sitting in the same room with Finance Ministers of emerging markets, presenting to them. Or you can be on complex international assignments for governments and big corporates.

If you have an MBB firm name on your CV, you have opened yourself to great opportunities if you so choose to leave your MBB firm. MBB consultants are known to get into top executive roles at big companies in different industries. This is because it is expected that while working at MBB you’ll have cultivated the skills, network and credibility to serve or lead in any other position you find yourself in.

The difficulty in entering MBB is a blessing here because recruiters would be thinking if this candidate was a former consultant at an MBB firm and the success rate of entering is less than four per cent then he or she is a top-level candidate.

This is not to discount that there are also great exit opportunities for Big Four consultants but MBB is better, and Vault seems to think so too. In Vault’s list of 25 top consulting firms by exit opportunities, MBB firms were ranked in the top four while only two of the Big Four made the list; EY and Deloitte placed 8th and 10th respectively.

Chances of becoming a CEO

If you want to become a CEO later on in your career both groups offer a great platform.

The next on USA Today Study‘s list were three members of the Big Four: Deloitte, PwC and EY. Deloitte alumni have a 1 in 2,150 chance of becoming a CEO in any of the companies listed above.

Both are stressful jobs. You’ll work long hours to meet tough deadlines. Since MBBs are present in fewer countries and have less staff but still have engagements all over the world, which usually means more time travelling. More travelling means that you have less time to build a life out of work

You’ll still have to travel if you work in the Big 4 but not as much because they have a presence in more countries and can use their local network of resources for many assignments.

Overall, there are more metrics we could have used to show the differences between MBB and the Big 4 both we have purposely settled for the above ones. While both of these groups are great places to work, MBB edges out the Big Four in most of the metrics we have used: prestige, pay, training & learning, exit opportunities, and so on. Thus taking the information into account, you should apply for the group that suits you most.

Do not forget to look at our other related articles that will help you in your search.

——–
Charles is a writer, practising lawyer and personal trainer who loves learning and developing himself. He graduated from Middlesex University, London with eight first-class grades in the second and third years of his law degree, and received a postgraduate offer from Cambridge University. He loves strength training, boxing and encouraging people to succeed in their pursuits (legal ones)
——–
Congrapps is the №1 Platform for Verified Successful Career Resources! We collected the actual Cover Letters & Interview Experiences of those who made it to the most competitive graduate and entry-level jobs in Banking, Finance, Consulting and Law in London.
We help graduates achieve their dreams by levelling the playing field and giving access to the same information to everyone!